1
Radical fearlessness, soul decides when
02 December 2011
Personal life
Towards a life of charity
1 November, 2011 by jf in Personal life

Charity… since childhood, this is a word I only whispered in my inner cloister.

Charity… The original radiance of this word has been dulled by the patina of time and by the encroachment of merchant ideology.

Charity… he who asks for it must be a needy person. He who gives charity is a powerful person, a member of the bourgeois, someone well installed in conventional society, someone who is in a position to give –not without patronizing– which legitimizes his.her power or existential posture. As a person from France, my original culture carries in its collective memory the cliché of the good deeds, or the bourgeois in their Sunday best giving to the beggars after church. 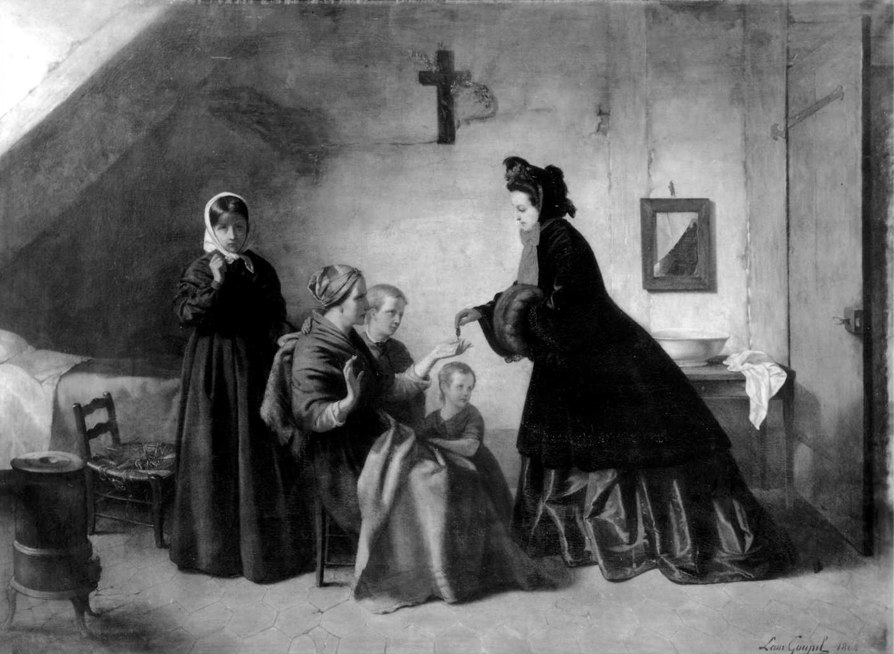 Charity… is this word buried forever? If so, we deprive ourselves of a treasure bursting with meaning, filled with history. The light and wisdom that were put in this word bursts to our eyes as soon as we break through the encroachment. In its original sense, caritas is the putting into practice and action of a state of absolute love. This is the love that is no longer directed towards a particular being or thing, this is the love that irradiates, that shines everywhere around, with no distinction, no direction. The manifestation of such love into acts is charity. There we give, there we receive, in the big chain of service that we offer to one another. In that place we are far from the merchant economy, locked as it is in its immediate reciprocity dogma (“if you don’t have what I need in return, I won’t give you what I have“). In the charity economy (usually called gift economy), we give everything we can give, and we receive what we need. No need for symmetry or immediacy. What is essential is to give in a state of love, with no condition, and to receive the same way.

Today I no longer whisper this word, instead I can proclaim it in full power, with exhilaration… It blossoms to the surface of my consciousness just like a waterlily coming from the depths.

Giving is easy. I have skills, knowledge, health, will, lot’s of things to offer. At least this is what others tell me.

Receiving is where I have so much to learn, practically.

Indeed, receiving in a state of charity confronts me with many obstacles, both imposed on me by society on the one hand, and coming from within me on the other.

Here are some societal questions to start with:

– How is it possible to live a charity based life today in a society that has chased it away?
– How am I going to build relationships and provide value that is neither considered as charity (as understood in the modern degraded sense), nor as dependency, nor as patronage, nor as philanthropy?
– How can I lay this social contract –live a charity based life– in a clear manner? How can it be well communicated?

The gift economy is our natural social contract, the one we have practiced in small communities since the dawn of time, starting with the family. The charity economy is the transposition of gift economy to the cosmic level, with no limit of time, number and space. In “Old Europe” where I live, solidarity is dying because of over-institutionalization. As far as I know, the contemporary social contract does not include provisions that we can live from charity. Receiving inevitably has something to do with profit (a sale, a salary, an inheritance, a annuity, dividends), or with being assisted… Because of scarce money, our societies don’t leave space for spontaneous offering, simple, without claim. We have to declare, subscribe, tax, justify, fill in forms… Isn’t it ironic, by the way, to see how much commercial exchange is deregulated, which leads to social and humanitarian catastrophes, whereas solidarity and donations are bounded by heavy, costly and blocking control mechanisms? Throughout history, however, collectives have always supported their shamans, their healers, their priests, their monks, their doctors by means of charity. But I am none of these. I am part of no church, I carry no spiritual or political ideology, I have none of these tags that reassure, and this adds spice to my situation. If I were a monk, no one would ask questions. People feel confused about me, and I understand them.

So how, in this context, do I not condemn myself to marginalization and being at-risk?

It is a fact that, these past months, my horizon has shifted to be very nearby. Some would call it a precarious life-style. Early in September for instance, it happened that I had almost nothing left to eat. This was an ironic situation as everything else around me was pure wealth: I was living in a beautiful house in Provence for which one year of rent has been offered, by charity, so I could work calmly and have a space for my little boy. Wealth because I was surrounded by high-quality electronic hardware to work on my current projects, wealth because my work permanently puts me in touch with magnificent human beings, wealth because I was in full health and full motion. And yet, there I was with almost nothing to eat, with a wallet as empty as the shopping basket. Support arrived just at the right moment, in its perfection, by the path of the heart. Wonderful people gave to me. Why? Certainly not because they were feeding the indigent –as a reminder I chose my current situation, it is not the result of an accident. These people gave to me because, in their experience, I could then continue my work in the great chain of service. In the end, it is this simple. Do ut des, I give so you can give, says this beautiful latin expression. Charity is a big chain.

Each time these situations of apparent precariousness have shown up, fear has never gone through me, not for a single moment. There have been no sleepless nights.

Fear left me a long time ago. This is an opportunity to awaken another ancient word: providence. From latin providentia — foresight. Providence implies direct knowing, beyond the reductive beams of the intellect, that everything is just, everything is in its right place, and that everything will happen in its right time. Providence is the universal mechanism upon which a being, if he/she is in a state of grace, therefore in service, will receive support in return. The being knows it. In order for providence to operate, one has to completely, fully, joyfully surrender, with no restriction, to the laws of the Universe. The let go has to be complete. Here, another ancient Christian notion, the one of sacrifice, is important. It’s yet another word that has been quite depreciated by modernity. Its etymology reveals that its original meaning is “to make sacred” (from latin sacrificium, of sacer facere). Once one has completely offered himself/herself to this Universal Principle –give it the name you want– each moment of life is lived like a present. A pure state of grace, as grace feeds grace. So I guess you can see that: providence is my main ally.

So far in this post, I have explored questions related to society as well as those about my inner attitudes. The next step is still missing: how, in a pragmatic way, can the transition towards a charity based life be done, while my feet are still bogged down in the swamp of the market economy?

In order to complete the transition, I have yet to release myself from what still binds me to my past economic and material life. I still have some family furniture at the storage warehouse that I have to pass on to my little boy and his mom. You would think I could just complete that, but actually there are entanglements. I still owe money to the storage warehouse. Until that debt is settled I can’t get access so I can’t clear this situation. I still have other things to pay from the past, mostly some old administrative stuff. No need for details here, but the truth is that during this first phase of my transition towards my new life, I have accumulated debts. I have not yet completely achieved the process of dispossession. In part this is due to a lack of time, as I was already giving priority to service. Or maybe I haven’t been radical enough? Everything that still ties me to the old, even if it’s not a lot, continues to cost enough to put me in debt. Nothing big, a few thousand euros. But when one has ceased to chase scarce money, small amounts begin to take proportions they didn’t have before… I still have to play a little bit inside this old economy so that, in the coming months, I can finally live fully a day by day life, debt-free, with what the universe and the heart of humans want to give me. Then I can pursue the migration towards free currencies. Free currencies have nothing incompatible with charity, although it is counter intuitive and against what most people believe (they only project onto the new what they know from the old).

As for the house in which I lived during these past 11 months, unless there is a last minute change, I am leaving it in the next 2 weeks. Indeed it has been a marvelous gift, however it was a transition space, just like the rest. Whatever places of living that will accommodate me in the future, I want them to be the expression of a clear contract, the one of charity. I don’t want to settle for a rent, even if it is offered. I want to honor the space where I live, support its evolution, help it enrich itself in the most profound sense, with the persons that are linked to it, be they owners or neighbors. I’m tickled that some of my close relationships have recently told me that a monastery would be the ideal place, as I have been thinking about this possibility for a long time. Truly, it is silence, support and concentration that I need. But which monastery would be ready to welcome a person like me with the project I carry? What spiritual place would want to contribute to the service I have chosen? Not to mention that my work requires some infrastructure: a good internet connection, a space to film, some organizational support… in short an environment that might not be very compatible with a contemplative space. But who knows?

Want to keep in touch?
SUBSCRIBE TO MY NEWSLETTER
Your data won't go to the big bad guys