0
Sri Aurobindo: “The earliest preoccupation of man in his awakened thoughts…”
06 March 2012
Next

Presidential elections: who will become the next captain of the Titanic? 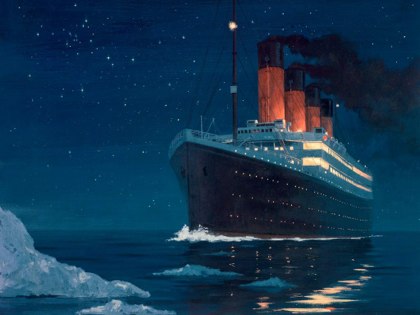 You got it: everything, almost, lies in the title.

It seems that most people have a hard time making a distinction between the captain of a ship, and the ship itself. If the ship has structural failures in its conception, the captain won’t change many things: it will strike someday or another. By design, the Titanic had to sink, no matter its captain. By design too, only a precise form of collective intelligence could pilot it: the pyramidal one. Indeed, the whole Titanic, from its architecture up to its very technical details, has a structure designed for the obedience towards an omnipotent and omniscient captain, with a chain of command trained to respond at his beck and call. We know the end of the story. A similar scenario happened more recently when the Costa Concordia hit the Italian coast, Jan. 2012.

Our large pyramidal collective intelligence organizations work exactly like these big ocean liners. Governments, administrations, large corporations, armies, churches… It doesn’t matter very much which captain operates at the top –elected or self-proclaimed– our big collective vessels have a poor adaptive capacity to navigate in today’s waters because of their very structure. They have a hard time dealing with social questions, surfing on the infinite systemic complexity of our planet, embracing current economic, environmental and ecological challenges. More precisely: pyramidal collective intelligence has become the systemic cause of the most painful symptoms that society has to face today. This may look like a personal opinion, nevertheless the discipline of collective intelligence proves it.

Therefore, in the same way ships like the Titanic or the Costa Concordia “attract” omnipotent captains, our institutional vessels attract omnipotent chiefs. In the best case, they make mistakes (that sometimes become fatal for everyone). In the worst case — unfortunately the most common one — leaders hardly resist abuse of power, because he infrastructure calls for it.

We castigate a president, condemn a Gaddafi, or hate a George W. Bush. By doing so we forget that the very nature of these institutional vessels brought such men to the helm. They exist as pure products of the system. The only difference between a captain and another one consists in the way they navigate. Don’t expect any of them to support another paradigm and infrastructure in which they would no longer have a power position and a reason to exist.

With the lenses of collective intelligence, presidential elections, no matter the country where they take place, look hopeless to me.

But what dies fertilizes the life that comes after. The bad news tell us that we won’t find any leverage of change in the ballot box anymore (supposing it ever happened in the past). On the good news side, I can vote every day, every hour, every second.

Indeed, each time I decide to buy or not buy something, I vote for or against the value system that produced that thing. Do I buy organic or not? Do I buy animal products or not? Do I invest in my health and other’s health or not? Do I pay attention to environmental, social and health information for each product, or not? Many apps provide these ratings and information in real time today.

Let’s follow this trail. Every moment I can improve my skills as a user, even as a designer or coder of socialware and communityware. These online softwares allow communities, local or global, small or big, to self-organize, self-actualize, without the need for them to abandon their sovereignty to pyramidal collective intelligence. Project management, cross-fertilization of ideas, decision making processes, conflict resolution, capitalization of experiences, collective memory, dialog spaces, digital self, free currencies… socialware cover many of these domains today, via social media or other shared online tools, opening the path towards holomidal collective intelligence.

Our citizenship can reach its full creativity in these directions. Let’s leave the Titanic, let’s stop trying to convince the captains, let’s build many small, agile, interoperable vessels, and let’s leave today’s political candidates to their brawls and electoral promises. Power, today, lies in the code.