A friend of mine wrote me this morning: “My school just cut off two positions that were necessary to pursue the deployment of our project. I was supposed to hire these two persons but the context is bad and the management is opposed to any hiring! Even though I have faith, I start to feel doubts in regards to my future and in pursuing this project“.

What project? A pedagogy in which students build their journey themselves. They are self-taught, they learn within a nutritive environment composed of devoted and passionate facilitators. In this place students develop themselves in an integral way, they open their intuitive and emotional intelligence as well as their mental-rational intelligence. All this with Web 2.0, social media, mobility, relationship, humility and self-exploration.

But, hey, no more budget… Have we heard this story somewhere before? 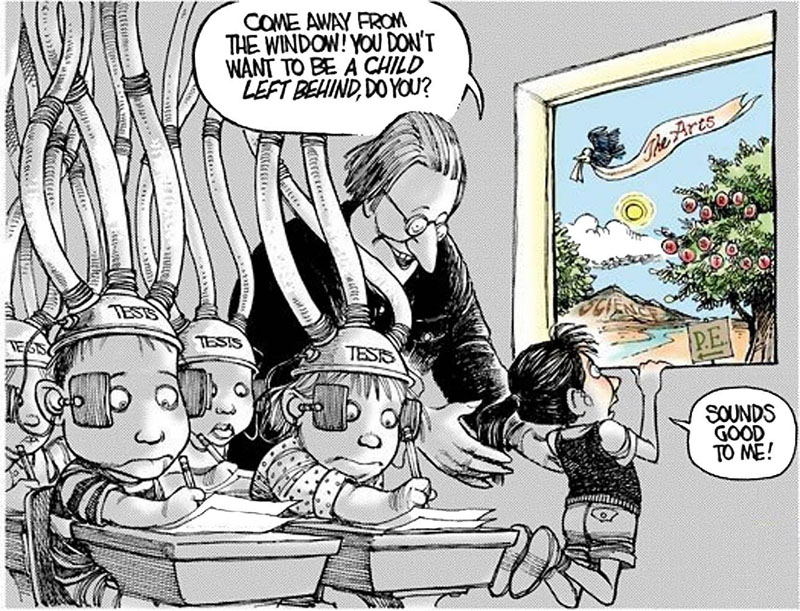 Let’s face it. The vision and the project carried by my friend deeply challenge the very founding principles of today’s teaching institutions. Schools and universities are an obsolete model, a 19th century industrial world view that sees humans as “containers” on an assembly line in which knowledge can be pored in a massive, reproductible way. It is not random that the universe of teaching is built with words such as “programs”, “departments”, “sections”, “levels”, “grades”, “evaluations”, “certificates”, etc. A mechanical, mineral, deterministic, predictive ontology that doesn’t leave much space for natural dynamics of life, for organic and chaordic growth.

Therefore it is through a series of “accidents” or Freudian slips –tied or cut budgets, fears, beliefs, laws and regulations, gossips, scarcity of time, the Peter Principle to name a few– that a pyramidal collective intelligence body rejects everything that can endanger it. These parapraxis operate like antibodies. Their function is to eliminate innovative evolutionary projects and visions, to discredit or discourage them, and eventually eradicate everything that threatens the deep structure of the collective body. It is useless to incriminate such or such leader who’s blocking things. He.she will tell you that he.she is obliged to do so because of his.her function or because of the ideology that he/she is a voice for.  Nothing personal, of course… He.she exists only because of the system that gave him/her some power, a system that has to be seen as a whole. Beyond all these obstacles, here and there, tiny pioneering cells remain, get inter-connected, coordinate, build new capacities in holomidal collective intelligence, and keep opening the path for the great mutation. These dynamics are well known and well identified in collective intelligence. Whoever evolves in these pyramidal collective intelligence contexts should be familiar with these principles. It leads to less deception and more efficient strategies.

Evolution plays at the edge of ecosystems, at the far boundaries of the old and the whispers of the new. These are turbulent areas filled with conflicts and a few fertile spots, often brutal spaces in which pioneers have to blindly trust the evolutionary forces that go through them and liven them up. There the only thing that can be trusted is the transcendent experience, this Ariadne’s thread to follow in the depths of the labyrinth, providing guidance within when everything outside is an evidence of impossibility.

I feel deep gratitude for my friend — and all my other pioneer friends — for the devotion they carry, for these battles they lead inside these old collective bodies (companies, schools, administrations, governments…) lead by pyramidal collective intelligence and its attached scarcity economy.

Let’s meditate. Let inner stillness operate our journey. Let evolutionary forces inspire us, they are filled with compassion and patience. Just like water, they carve rocks.